On the island of Grand Manan 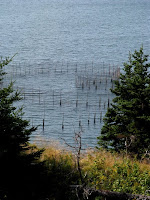 We spent Monday neither in the air nor on the water but on land, walking down the steep wooden steps and across the wooden bridge over a rocky chasm to the Swallowtail Light on the headland where we sat a while contemplating the sea. The curious circular or heart shaped fences in the sea are traps for herring, fishing weirs, so we learned in the afternoon after hiring a couple of bikes and having peddled against the wind along the coast road as far as the museum at Grand Harbour. The island's school was across the road, the original one being a simple shed (plus outhouse) now in the museum's back garden.

The museum showed a bit of everything, some of the exhibits put together by pupils at the school: the history of local fishing, the spoils from wrecked ships, a huge lighthouse light filling the stairway, a display of picture-rugs, a room full of stuffed birds, a model of the "slotted wave guide"(a piece of radar equipment) that a worthy islander (Ernest Guptill) had invented, as well as various model boats and everyday artefacts from the past. 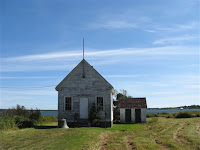 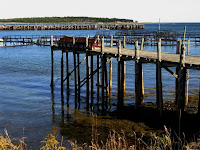 While cycling back to our motel, the wind pleasurably behind us now, we paused at the salt marshes and fisheries, the sea a glorious deep blue.

The rest of our gang had departed at mid-day after we'd all lingered over breakfast at the Compass Rose in a room with another sea view. Left to our own devices that evening, Chris and I dined at Sailors Landing in North Head as on the first night, watching their slide show of photos, and before our weary legs gave way we took one last look at the Swallowtail light house from the north side of the village, walking down by the shore under the stars, then slept like logs for at least the next ten hours, with the sound of the waves in our ears.